MORNITORING POP IN COASTAL VIETNAM AND SOME RESULTS OF POLYCHLORINATEDBIPHENYL (PCBs) POLLUTION STATUS IN THE NORTHEAST COASTAL REGION AND RED RIVER DELTA, VIETNAM

1) Institute of Marine Environment and Resources-VAST;

ABSTRACT: The persistence organic pollutants of PCB group (28, 52, 101, 138, 153, 180) were determined in three coastal environment components including water, sediments and tissues of Clam (Meretrix lyrata) in the Northeast area and Red River delta. The samples were collected in March and August, 2012. The results showed that the PCBs were appearing in all water, sediments and tissues of Clam with the concentrations 719.46 – 792.11 ng/L; 9.83 – 14.97 ng/g; 39.79 – 40.30 ng/g respectively, and lower than environmental standards. The distribution of total PCBs in the three environmental components were varied by the seasons and space. They were an inversive relationship of PCBs in the coastal water- sediment environment and tissues of Clam in Northeast area, meanwhile ambient relationship in Red River delta. The bioaccumulation factor (BAF) of the total PCBs for Clam tissue was in the range from 7.46 to 56.42, higher in Red River delta, and lower in Northeast area in both rainy and dry seasons.

There are 14 monitoring stations along the coastal Vietnam, which are: Tra Co, Ha Long, Do Son, Ba Lat, Sam Son, Cua Lo; Quang Phu, Con Co, Son Tra, Dung Quat, Quy Nhon; Nha Trang, Ganh Rai, Rach Gia (figure 1). The organic chlorinated pesticides have been observed since 1996, and the polychlorinated biphenyls have been monitored since 2010. However, the congeners in POPs, which have been monitored, are not synchronization among water, sediment, tissue, and stations in comparison. That affects on monitoring and evaluation of pollution levels of POP, and of the accumulation POPs from the environment into the organism, as well as potential impacts to human health. To overcome limitations, to build a unified POP monitoring program in the environment of coastal part.

Vietnam participated in the Stockholm Convention on 22 of July 2002,  research has managed to use and commitment gradually eliminate the persistent organic pollutants (POPs) from the environment by toxic carcinogen and its genetic mutation. Vietnam does not produce PCBs but used in the imported industrial and power sector equipments. Currently, the amount of PCBs in Vietnam is huge, according to some surveys, it could be up to 20,000 tons. Accordingly, Vietnam Electricity Corporation is organization are managing the most amount of electrical equipment (production and transmission). Initial statistics show that this organization is currently managing over 60% of total PCB in Vietnam. Specifically, approximately 9,000 tonnes of PCB oil, and 1,000 tons of PCB oil in suspected electrical system. In addition, there exists a PCB volume of industrial devices outside the power sector has not been pinpointed [7]. Coastal is last place receiving pollutants, including PCBs from the river basin water stream flowing into the sea, and the redistribution of the components of water, sediments and biota. The findings of this paper on PCBs pollution in coastal environments and the ability to accumulate PCBs in clam tissues through bioaccumulative factor (BAF) contributes into management and prevention works effectives of POPs / PCBs to health and human ecology.

2.1. the area of sampling and study

The samples of water, sediment and clam tissue was collected at the same time in two field campaigns: in March (dry season) and in August (rainy season) 2012. The monitoring station system was set up in the northern coastal Vietnam from Mong Cai to Ninh Binh. Its divided into two natural regions: The northeastern coastal and red river delta. (figure 2). 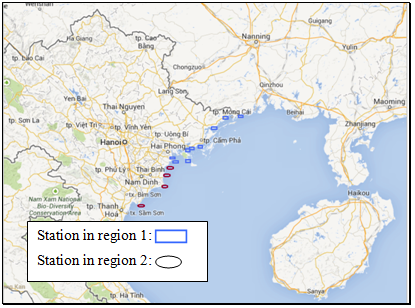 2.2. The sample collection and preservation

Take water samples at 0.5 – 0,7 m depth by Niskin (PWS) equipments and contain in dark colored glass bottle. Sediments are scooped by crab hoe Pornar and take it around 0 – 5 cm depth from surface in to dark colored glass bottle. Catch clam (Meretrix lyrata) by bottom scratch net, and collect ones with long, wide, thick size around 2,6 – 5,8 cm, 1,0 – 5,1 cm and 0,6 – 3,3 cm respectively, and wrap clam sample in cleaned aluminum paper. All collected sample are maintained in box at temperature 0 – 40C condition. [2, 5, 6]

BAF – Bioaccumulation Factor with PCBs is calculated in some publication journals [6, 8, 10]. Whereby:

ECf: Concentration of PCBs in water sample where organisms living in (ng/l).

3.1. The environmental characteristics of two regions

3.2. The total amount of PCBs in the study samples

3.3. The PCBs concentration in each coastal component

Because PCBs always appear in sea water sample and varies according to seasonal and geographical features so study region have been received sources of PCBs wastes. Some chemical compounds contained PCBs have been banned to use in development countries from 1970s, but in Vietnam it is still using and replace gradually in electrical sector for instance, so the source of PCBs wastes is existing. According to season, the total PCBs concentration in dry is higher than rainy in region 1, but in region 2 is reversed. Total PCBs concentration in water sample of region 1 is 1,1 times higher than region 2 (table 2).

Table  2. The seasonal fluctuation of PCB concentration in coastal water

Table 3. The seasonal fluctuation of PCB concentration in coastal sediment

Clam (Meretrix lyrata) is bivalve species living in sandy mud bottom, and filter feeding and little moved. The PCBs concentration in clam tissue vary seasonally to water and sediment environment. However, PCBs concentration accumulate in tissue depending on not only living environment but also biological features of organism. The distribution tend of accumulated PCBs in dry season clam tissue is lower than rainy season in both region 1 and 2. This finding can indicate that pollution sources of PCB are ongoing in coastal water environment (table 4).

Figure 3. Bio accumulative factor of clam (Meretrix Lyrata) with PCBs in region 1 and 2

Thus, the PCB pollutants was carried to coastal region by water flow with very low concentration but the PCB concentration is redistributed and accumulated into sediment and organism tissue with many times higher level. This result shows a possibility of PCB accumulation into sediment and organism tissue. The BAF of clam with PCBs also presents the exposure of PCB in a inorganic component into organic one and damage to ecosystem and local residential through food chains. This illustration results suggest for researchers, managements in their work on prevention PCB or POP in general from the coastal environment.

The persistent organic polutants, PCB group, appear in three components of the northeast coastal and red river delta, which is water, sediment, and organism tissue (Meretrix Lyrata). The total PCBs concentration in these components above is 719,46 – 792,11 ng/L; 9,83 – 14,97 ng/g dry; và 39,79 – 40,30 ng/g dry, respectively. Although, PCB concentration exist in water, sediment environment and in organism tissue but PCB levels are all in the allowable limits of Vietnam regulations or US FDA (US Food and Drug Administration).

The PCB distribution and accumulation according to seasonal features, but there are some differences in each natural components and each study region. The distribution and accumulation of PCB in inorganic components (water and sediment) depend on contaminated water sources, but in biotic component ( like clam tissue) still depend on accumulation ability of organism species and persistent characteristics of pollutants like PCB. The BAF of clam with PCB is around 7,46 – 56,42; in which the BAF in red river delta region is higher than in the northeast coastal Vietnam.

This work was completed under the financial support of the VAST project (CTG01/12-13) and the national monitoring network program 2014 (ĐTQG/IMER/VAST). The authors would like to thank those sponsors. Thanks to local departments and agencies helped us in the process of implementation of tasks.